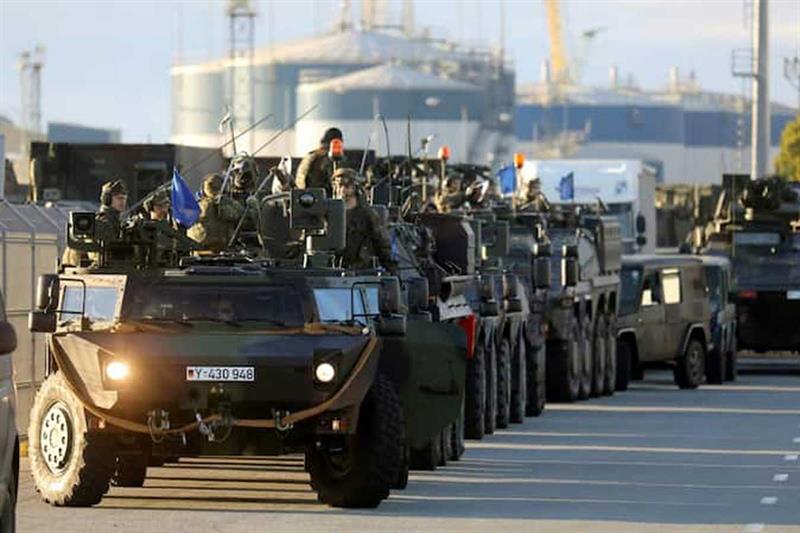 Around a hundred German soldiers have disembarked in Klaipeda. AFP

The troops drove off the ferry in the port city of Klaipeda.

They were to make up the command unit of a new brigade, a group usually made up of around 4,000 soldiers.

“Our message to our allies here, on the eastern flank, is that we are committed to ensuring security,” said the brigade’s commander Christian Nawrat.

The command unit would remain permanently in the Baltic nation, while combat units would join them for exercises, he added.

A high-ranking member of the German military said the first drills could be held in October.

Germany, which heads up a NATO battle group in Lithuania, already has around 1,500 German soldiers in Lithuania.

The formerly Soviet-ruled Baltic states of Estonia, Latvia and Lithuania, which are all now EU and NATO members, are worried they could be next if Russia defeats Ukraine.

Since the start of the conflict, they have asked for more NATO troops and the creation of brigades to replace the current units.

Chancellor Olaf Scholz in June said his country was ready to deploy more troops to Lithuania “towards a robust combat brigade that can operate both as a deterrent and defend against an aggression”.

NATO has strengthened its eastern flank in recent years, particularly since Russia’s annexation of Crimea in 2014.

In 2017, four multi-national battle groups were deployed to the three Baltic states and Poland.

Following the start of the Russian invasion in late February, NATO has decided to set up four new battle groups in Bulgaria, Hungary, Romania and Slovakia.

They could be sacked for speaking out, but these workers want you to know what’s happening