Men have greater cancer risk because of biology NOT because they drink and smoke more,


Men drink and smoke more than women — but that is not the reason they have a higher cancer risk.

A major study suggests biological differences are the real reason behind the disparity between sexes.

Understanding these differences could help to improve prevention and treatment, researchers say.

The study looked at 300,000 middle-aged and older Americans who did not have cancer over 15 years.

Men were more than twice as likely to develop the disease compared to women — even when lifestyle factors were ruled out.

‘This suggests that there are intrinsic biological differences between men and women that affect susceptibility to cancer,’ said lead researcher Dr Sarah Jackson, an epidemiologist at the National Cancer Institute.

Researchers suggested differences in genes, hormones and the immune system all play a role.

It comes as UK scientists today called for all cancer patients to receive genetic testing so they can be given drugs that work best against their tumour. 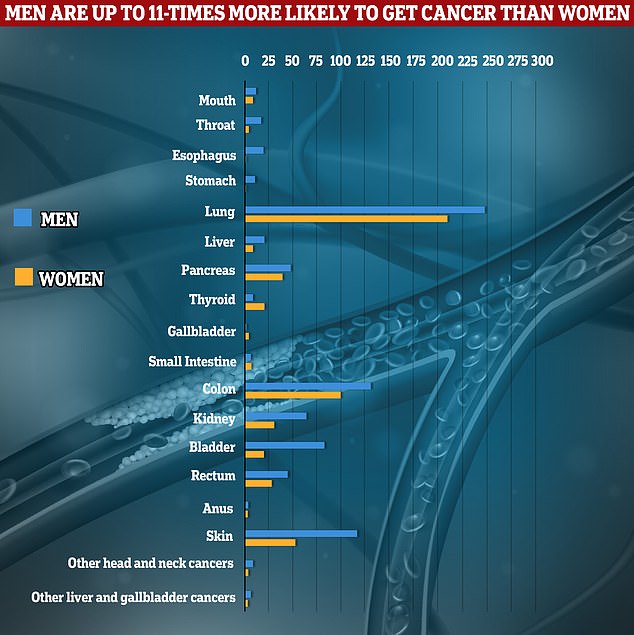 Researchers from the National Cancer Institute examined the prevalence of different cancers in 171,274 men and 122,826 women between 1995 and 2011. The graph shows the number of cancer cases among men and women per people-years (horizontal axis) — the prevalence over time. Results show cancer rates are up to 11-times higher among men than women — just two cases of esophagus cancer among women per 100,000 people-years, compared to 22 cases among men 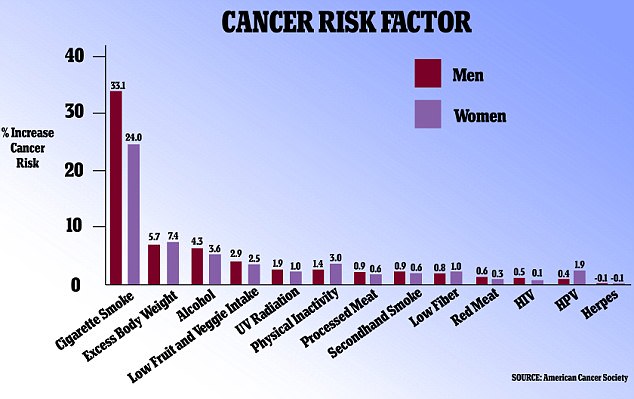 How lifestyles affect your cancer risk – based on gender: A 2017 study by the American Cancer Society showed how cigarette smoking, alcohol, processed meat and low fruit and vegetable intake is riskier for men than women. For women, excess body weight, physical inactivity, low fiber and HPV are riskier for developing cancer 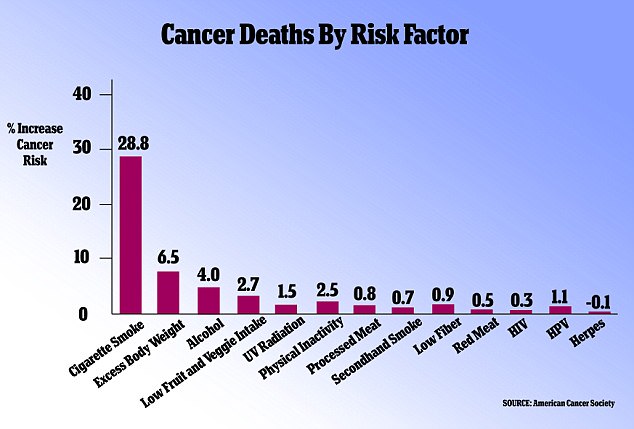 Overall, cigarette smoking drives more than a quarter of cancers, while excess body weight and alcohol consumption are the next riskiest lifestyle factors, which could be avoided

Cancer is very common and most people have relatives who have had cancer. People often worry that a history of cancer in their family greatly increases their risk of developing it. But fewer than 1 in 10 cancers are associated with a strong family history of cancer.

Drinking alcohol increases your risk of mouth and throat cancers. But it is also linked to other cancers.

In general, the more you drink, the higher your risk. Your risk is even higher if you also smoke.

BEING OVERWEIGHT OR OBESE

Being overweight increases the risk of many types of cancer, including cancers of the bowel, kidney, womb and gullet (oesophagus). Women who are overweight and have been through the menopause also have a higher risk of breast cancer.

Keeping to a healthy body weight reduces your risk of cancer and other health problems, such as heart disease and diabetes.

The findings, published in the journal CANCER, show 17,951 cancers were detected among men, while just 8,742 were diagnosed among women.

They did not look at cancers that are sex-specific – like womb cancer or prostate cancer.

Men were 11-times more likely to develop oesophageal cancer and four times more at risk of stomach or throat cancer.

They also had a three times greater chance of being diagnosed with bladder cancer.

Further analysis found men were still more likely to develop cancer overall when other risk factors like smoking, alcohol intake and exposure to carcinogens were accounted for.

Scientists have previously pointed to higher rates of smoking, alcohol consumption and exposure to chemicals like asbestos in factories.

They also said men may be less likely to seek medical advice.

The team suggested the male sex hormone testosterone may increase the likelihood of skin, prostate and liver cancer among men by promoting cell growth.

Meanwhile, they said women appear to mount a stronger immune response against oncogenic infections — those which can cause cancer, such as hepatitis and HPV — which could lower their risk of some cancers in comparison to men.

And research suggests women have an extra copy of genes that protect against cancer compared to men, which could offer them further protection.

Study leader Dr Sarah Jackson, an epidemiologist at the National Cancer Institute, said: ‘Our results show that there are differences in cancer incidence that are not explained by environmental exposures alone.’

It comes as scientists today called for the NHS to offer all cancer patients genetic profiling to determine which drugs will be most effective against their tumour.

Biomarker tests should be offered to Britons as soon as they are diagnosed to shape their care and track how their illness evolves, according to a consensus statement from the Institute of Cancer Research (ICR) and nine other organisations.

The tests look for genetic, protein or imaging ‘markers’ that identify weaknesses in cancers and can match patients to the treatment they are most likely to respond to.

It is ‘crucial’ that medics can use these tests but ‘regulatory processes and resources have not kept pace with the science’ so they are not always carried out.

The group called for genetic profiling at diagnosis and at regular intervals to become ‘standard’ within the NHS so patients receive personalised treatment.

Biomarker tests should be developed alongside cancer drugs and regulations should be reformed so they are much easier to assess and approve for use, they said.

The scientists admit it is expensive to make and develop the tests but said it would e more cost-effective for the health service to target therapies to those who are most likely to respond.

Scientists have thought men’s propensity to enjoy a few more drinks and take more smoke breaks than women was why they had higher rates of cancer in general. But now a major study of 300,000 Americans by the National Cancer Institute suggests biology makes men more vulnerable to cancer, not bad health habits

Sally Hayton, 57, from Manchester, had a cough in early 2013 but was told there was nothing to worry about by medics following a lung scan.

By November, she started to lose sight in her right eye. An optician referred her to the emergency department, where hospital doctors discovered she had stage 4 lung cancer and a secondary tumour had developed behind her eye

She was told she only had 10 months to live but a sample of her tissue was sent to a laboratory to test for biomarkers.

Results showed she had a mutation in her ALK gene. This mean Ms Hayton could be matched to a targeted treatment which worked for more than four years.

She was then moved to another targeted treatment which she has been on for more than three years.

Ms Hayton added: ‘Biomarker testing can be life-changing. Before I started on the targeted treatments, I had chemotherapy, and the difference in side effects was massive.

‘It’s essential biomarker testing becomes mainstream. If a mutation shows up with a specific treatment available for it, that could give people extra years and a higher quality of life.’

Professor Kristian Helin, chief executive of the ICR said: ‘We believe every cancer patient should have the opportunity for their cancer to be molecularly profiled to assess biomarkers that can give vital clues about how their disease should best be treated.

‘Biomarker tests can direct treatment precisely to the patients who will most benefit, which can both improve the lives of patients and increase the cost-effectiveness of treatment for the NHS.

‘It’s essential that the regulations that govern clinical trials and the approval of new tests and treatments keep pace with the rapidly moving science.

‘At the moment, it can be hard to get new biomarker tests developed, approved and made available for patients. That can in turn act as a disincentive for companies and academics to develop new biomarkers to guide treatment in the future.’

Read Nore:Men have greater cancer risk because of biology NOT because they drink and smoke more,

Easing into vacation aboard the Boston-to-Cape Cod train

Your child’s academic success may start with their screen time as infants,…