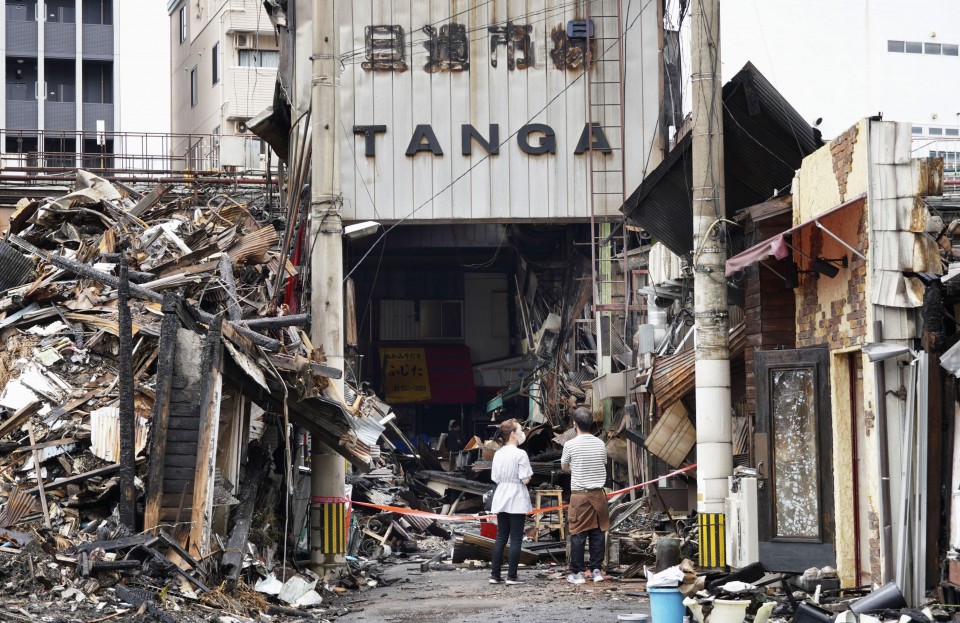 People look at the ruins of the fire-hit Tanga market in Kitakyushu, southwestern Japan, on Aug. 16, 2022. A fire broke out on the night of Aug. 10. (Kyodo) ==Kyodo

The following is the latest list of selected news summaries by Kyodo News.

WASHINGTON – The U.S. military said Tuesday it test-launched an intercontinental ballistic missile to demonstrate the readiness of its nuclear forces, carrying out the test after a postponement earlier in the month amid increased tensions with China over Taiwan.

The Minuteman 3 test launch is part of “routine and periodic activities intended to demonstrate that the United States’ nuclear deterrent is safe, secure, reliable and effective to deter 21st century threats and reassure our allies,” the U.S. Air Force said in a statement.

WASHINGTON – President Joe Biden on Tuesday signed into law a $437 billion investment bill that includes what he calls the largest U.S. spending ever aimed at combating climate change, while raising taxes on large companies.

The law is Biden’s latest legislative win ahead of the November midterm elections, in which control of Congress will be at stake. The administration has touted the Inflation Reduction Act as including measures to address high prices, such as by lowering energy bills and health care costs on prescription drugs.

The 71-year-old’s positive result came after President Joe Biden recovered from contracting COVID-19 last month. He tested negative Tuesday morning, but will wear a mask for 10 days indoors and in close proximity to others as he is deemed a close contact of his wife.

TOKYO – The chairman of a bipartisan group of Japanese lawmakers working to advance relations with Taiwan plans to visit the self-governed island next week, sources close to the matter said Tuesday.

Keiji Furuya, head of the Japan-ROC Diet Members’ Consultative Council, is expected to meet with Taiwan President Tsai Ing-wen and defense officials of the island, which calls itself the Republic of China, to reaffirm the ties during the three-day visit from next Monday.

YANGON – The trial of a Japanese man has begun in Myanmar over his alleged involvement in an anti-coup protest amid calls from Japan’s government for his early release, Myanmar’s ruling military said Tuesday.

Documentary filmmaker Toru Kubota, detained in a Yangon prison, has been charged with sedition and violating the immigration law.

TOKYO – A Tokyo-based restaurant chain operator revealed Tuesday it had withdrawn an appeal for a court case in which it demanded damages against the Tokyo metropolitan government for ordering business hours be reduced during the coronavirus pandemic.

The announcement by Global Dining Inc., which runs dozens of restaurants, finalizes the ruling in May by the Tokyo District Court outlining that the order had been illegal, but that Tokyo Gov. Koike Yuriko, who had made the order, was not at fault.

TOKYO – Heavy rain is expected to fall again in parts of Japan through Thursday, with coastal regions in the north and west at particular risk of landslides and flooding, the country’s weather agency said.

The agency called for vigilance as a front extending from a low pressure system is forecast to move south toward areas facing the Sea of Japan, warning of highly unstable atmospheric conditions that could lead to lightning and tornados.

TOKYO – Japan reported a record number of weekly cases of ambulances struggling to find a hospital for patients in the week through Sunday, hitting a high for a third straight week, as the country grapples with a surge in COVID-19 infections, the government said Tuesday.

The number of cases logged from Aug. 8 to 14 increased by 2 percent from the previous week to 6,747, of which 2,836 involved patients with respiratory difficulties, among other symptoms, and suspected of having COVID-19, according to the Fire and Disaster Management Agency.

First money management app for families rolls out in UAE