Japan is planning to hold a foreign ministerial meeting of the Group of Seven industrialized nations in a resort town of Nagano Prefecture, central Japan, in April next year, ahead of the group’s summit scheduled in Hiroshima in May, sources close to the matter said Sunday.

Prime Minister Fumio Kishida’s government is also arranging to hold a finance ministers’ and central bank governors’ meeting in May in Niigata, a coastal city facing the Sea of Japan northwest of Tokyo, according to the sources.

The government is expected to finalize the plans and announce them soon, the sources added. 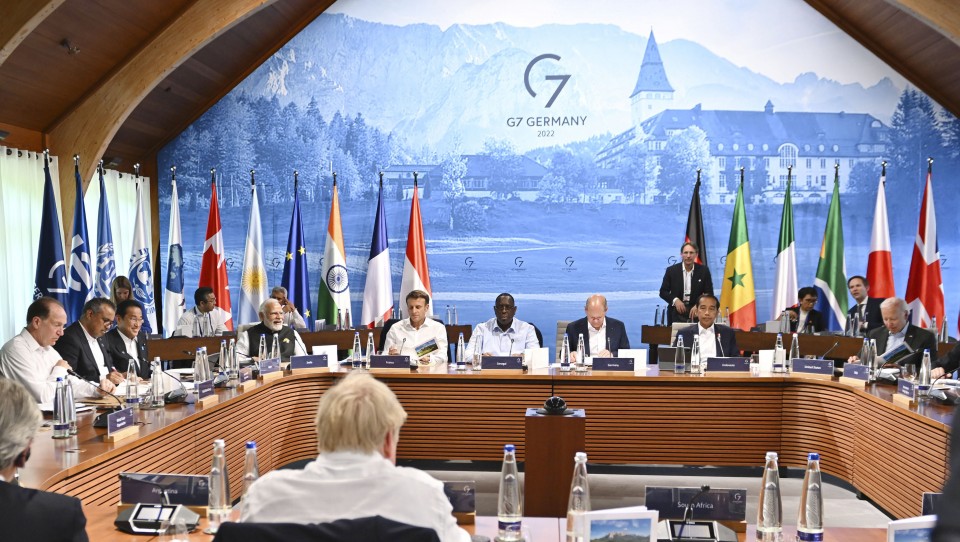 The second day of a three-day Group of Seven summit is held in the German mountain resort of Schloss Elmau on June 27, 2022. (Pool photo) (Kyodo) ==Kyodo

The envisaged talks in Nagano’s Karuizawa will pave the way for the G-7 summit in Hiroshima, where Kishida aims to issue a strong message on realizing “a world without nuclear weapons,” as Russia has threatened to use nuclear arms in its war against Ukraine.

The government plans to choose Karuizawa given its experience hosting large-scale international conferences, including a meeting of environment and energy ministers from the Group of 20 major economies in 2019, and the G-7 transport ministers’ gathering in 2016, according to the sources.

Known as a summer retreat with plentiful accommodations, the town also has an advantage in terms of its accessibility from Tokyo, which is just over an hour away by bullet train.

At a wrap-up press conference of the G-7 leaders’ talks in Germany in late June, Kishida, elected from a constituency in Hiroshima, said that next year’s summit, under Japan’s presidency, would take place in the western Japan city, one of the two atomic-bombed cities in World War II.

At the planned foreign ministerial meeting in Karuizawa, top diplomats of Britain, Canada, France, Germany, Italy, Japan and the United States, plus the European Union, are expected to discuss the threat by Russia to use nuclear arms in its war against Ukraine and China’s intensifying military activities in the Pacific, among other issues, the sources said.

In Japan, 22 municipalities have applied to host G-7 ministerial meetings being held in the country next year.

The government initially considered holding the foreign ministerial meeting in Nara, an ancient Japanese capital home to some World Cultural Heritage sites. However, the plans were dropped due to security concerns following the assassination of former Prime Minister Shinzo Abe in July in the western city, according to the sources.

Japan held a G-7 foreign ministerial meeting in Kyoto in 2008 and Hiroshima in 2016 while also hosting a G-7 summit each of those years.

Omicron COVID-19 booster shots are coming: Will they be a game-changer?