Is life in the UK really as bad as the numbers suggest? Yes, it is


At a time of shortages, we are certainly not short of gloomy economic forecasts. The Resolution Foundation think-tank notes that average real earnings have fallen by 7 per cent since a year ago and predicts that earnings will take four or five years to recover to the levels of January 2022.

Yet if the forecasts are bad, it is the scene in the rear-view mirror that is truly horrifying. The British economy is in a generation-long slough of despond, a slow-burning economic catastrophe. Real household disposable income per capita has barely increased for 15 years.

This is not normal. Since 1948, this measure of spending power reliably increased in the UK, doubling every 30 years. It was about twice as high in 1978 as in 1948 and was in touching distance of doubling again by 2008, before the financial crisis intervened. Today, it’s back at those pre-crisis levels.

It’s worth lingering on this point because it is so extraordinary. Had the pre-crisis trend continued, the typical Brit would by now be 40 per cent richer. Instead, no progress has been made at all. No wonder the Institute for Fiscal Studies is now talking of a second lost decade.

Go back and look for historical precedents for this, and you will not find much. In the National Institute Economic Review, economic historians Nick Crafts and Terence Mills examined the growth in labour productivity over the very long run. (This is defined as the total output of the UK economy divided by the total number of hours worked; labour productivity is closely connected to material standards of living.) They do find worse runs of performance — 1760 to 1800 was not much fun — but none within living memory. Nowhere in 260 years of data do they find a sharper shortfall from the previous trend. The past 15 years have been a disappointment on a scale that previous generations of British economists could hardly have imagined.

The questions of how this can have happened, and what can be done to change things, can be left for another column. (Part of the problem, in any case, may have been government by newspaper columnists.) But it is worth looking for symptoms. Is life in the UK really as bad as the apocalyptically bad economic numbers suggest? Perhaps so. There are some obvious problems: widespread worry about the cost of living; strikes everywhere; the utter meltdown of the UK’s emergency healthcare.

There are also subtler indicators of chronic economic disease. Consider the public finances. In an ideal world, governments offer their citizens low taxes, excellent public services and falling national debt. In normal circumstances, we can’t have it all. Right now, we can’t have any of it.

We have rising taxes. At more than 37 per cent of national income, they are four percentage points higher than they’ve tended to be over the past four decades. Yet those high taxes are doing nothing to shore up public services, which have been steadily squeezed for more than a decade. (The NHS, believe it or not, has been shielded from this squeeze; if it’s bad at your local A&E, don’t think too deeply about schools, courts or social services.) Low growth puts pressure on public sector wage settlements — if the pie isn’t growing, no wonder there is such a scrap over each slice. One might at least hope that, with high taxes and spending constraints, debt would be low and falling. No. Debt is high, the deficit is a permanent fixture and interest payments on public debt have risen to levels not seen for 40 years.

Many people struggle to pay for the basics. A large survey conducted by the Resolution Foundation in late November found that about a quarter of people said they couldn’t afford regular savings of £10 a month, couldn’t afford to spend small sums on themselves, couldn’t afford to replace electrical goods and couldn’t afford to switch on the heating when needed. Three years ago, only an unlucky few — between 2 and 8 per cent — described themselves as having such concerns over spending. More than 10 per cent of respondents said that at times over the previous 30 days, they’d not eaten when hungry because they didn’t have money for food.

This is not supposed to happen in one of the world’s richest countries. But then, the UK is no longer in that club. As my colleague John Burn-Murdoch has recently shown, median incomes in the UK are well below those in places such as Norway, Switzerland or the US and well below the average of developed countries. Incomes of the poor, those at the 10th percentile, are lower in the UK than in Slovenia. 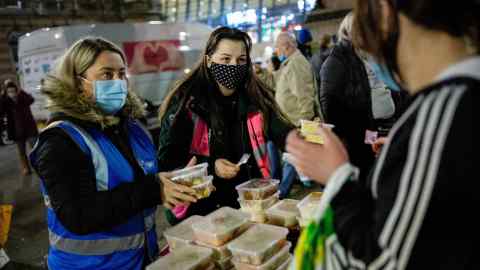 If all this was happening during a deep recession, we could have hope. “One day,” we’d say to ourselves, “the business cycle will turn, businesses will start hiring again, tax revenues will increase and some of our problems will disappear of their own accord.”

But we are not in a deep recession. Recently unemployment has been lower than at any time since before the prime minister was born, which suggests that a dramatic cyclical uptick is unlikely. The UK economy has the accelerator to the floor yet is barely able to gain speed. That is hardly likely to improve as the Bank of England applies the brakes.

I don’t believe the situation is hopeless. The UK has many strengths and many resources and has overcome adversity before. But if we are to solve this chronic economic problem together, we first need to acknowledge just how serious — and how stubborn — the issue has become.


Read Nore:Is life in the UK really as bad as the numbers suggest? Yes, it is

Biden on classified docs discovery: ‘There’s no there there’

Factbox: Britain on strike: Which workers are walking out on Feb. 1 and Feb. 6?

United Kingdom Bancassurance Market Size To Grow At A CAGR Of 5.20% In The Forecast…