If there were any questions as to how Bayern Munich were going to compensate for the loss of Robert Lewandowski, they were answered emphatically on Friday night as the German champions inflicted a devasting defeat on Eintracht Frankfurt.

Senegalese striker Sadio Mane, who arrived this summer as an indirect replacement for Lewandowski, was on the scoresheet with his first Bundesliga goal – and Bayern’s third in a 6-1 rout.

Joshua Kimmich opened the scoring, firing a free-kick through the smoke from the Frankfurt ultras’ pyrotechnics to wrong-foot Eintracht goalkeeper Kevin Trapp after just five minutes.

Shortly after, Benjamin Pavard fired home unmarked in the box from a corner, with Frankfurt defenders all caught following the ball.

After their goals, both Kimmich and Pavard ran demonstratively over to celebrate with Bayern’s set-piece coach Dino Topmöller, suggesting some work had been done on free-kick and corner routines in training beforehand.

“Dino mentioned in the week that Trappo [Kevin Trapp] tends to stand a bit further off his line, so maybe give it a go,” Kimmich told DAZN post-match.

“The free-kick was probably a bit far out for it, to be honest,” laughed head coach Julian Nagelsmann. “But he hit it well, so compliments to all involved.” 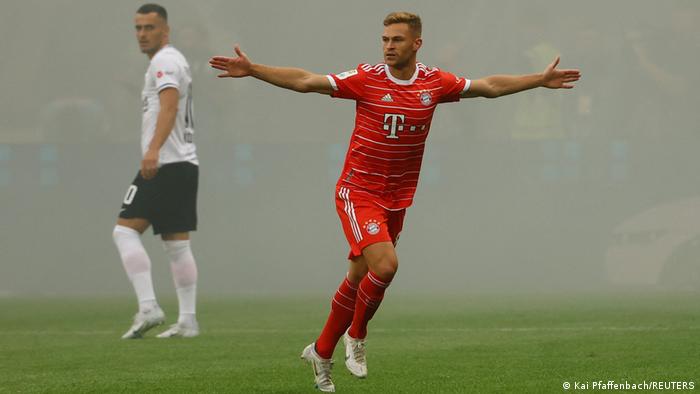 The next three goals all involved Mane, first heading home from a Serge Gnabry cross, then winning the ball ahead of a Jamal Musiala tap-in, and then winning another 50-50 battle with Frankfurt captain Sebastian Rode to help set up Gnabry for Bayern’s fifth.

Frankfurt scored a consolation goal through Kolo Muani, the new French arrival from Nantes capitalizing on a rare Manuel Neuer error to slide the ball into the empty net.

But it changed nothing as Musiala, who ran rings around Frankfurt’s midfield in the first half, capped the rout with a second goal late on.

“We’re all technically good so we’re all trying to combine with each other up front,” said Musiala. “We did the same with Robert Lewandowski in the ream but now we just have to find other ways.”

Head coach Oliver Glasner had brought his captain, Rode, back into the team in place of Daichi Kamada, despite the Japanese playmaker scoring two goals in the cup against Magdeburg on Monday, with the specific aim of tightening up the midfield. But his plans backfired spectacularly.

“We were too wild, we wanted too much,” he admitted. “We didn’t actually want to play that fast but the two quick set-piece goals gave the game a different dynamic. The wingbacks got too high, we were trying to pressurize Bayern, but that opened up space in behind and you saw what happened: too many chances, too many goals.” 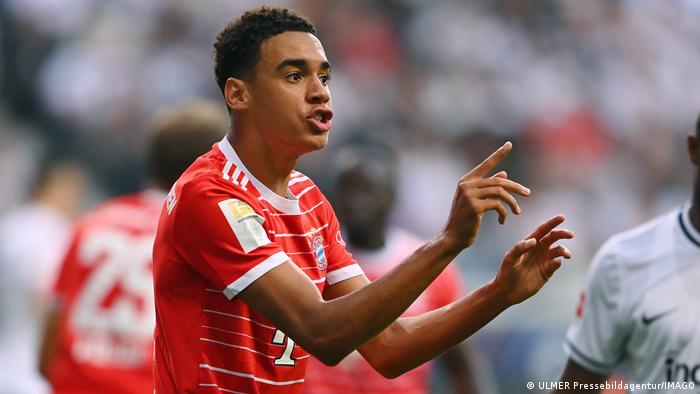 Bayern won their tenth title in a row last season and, on this performance, they’re firm favorites to make it 11. After a maiden season and a maiden title, head coach Julian Nagelsmann is stamping his own philosophy on the team.

“Obviously, when you first arrive somewhere new, you try to adjust and fit in and work well together, because the players are used to doing certain things [a certain way],” he said pre-match. “But now we want to try to bring our own DNA onto the pitch more.”

With Lewandowski gone, Bayern are less obliged to play to a single out-and-out striker, and Nagelsmann has more scope to shape the team in his own image.

That meant a vertical 4-2-2-2 formation in Frankfurt led by Mane and Gnabry, with Musiala, Müller, Kimmich and Sabitzer all marauding ad combinging behind them.

The result was devastating.

Walking in the footsteps of Holocaust survivors – The NAU Review