About 3,500 followers of the Unification Church from across South Korea, mostly Japanese women married to local men, staged a protest in central Seoul on Thursday against what they call biased Japanese media reports about the religious group.

The women, who immigrated to South Korea via mass weddings arranged by the controversial group, chanted slogans such as “Stop suppressing religion.” Some of them brought their children to the demonstration.

The demonstrators claimed that the church, formally known as the Family Federation for World Peace and Unification, is being “ostracized as a social witch” in Japan following the fatal shooting of former Prime Minister Shinzo Abe by the son of a follower. 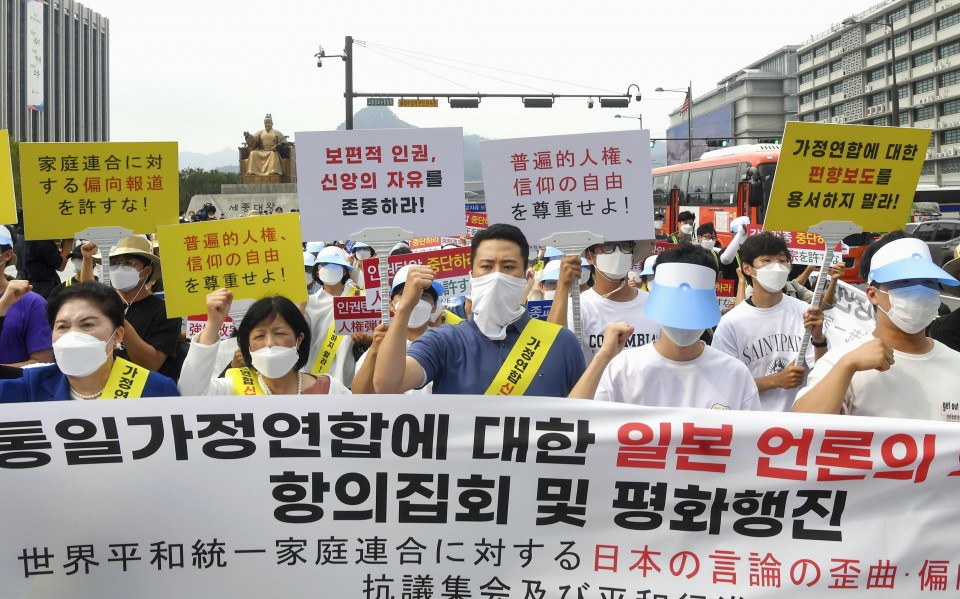 Japanese people living in South Korea who belong to the Unification Church march in downtown Seoul on Aug. 18, 2022, to protest against the Japanese media’s coverage of their religion, blasting it as biased. (Kyodo)

They also offered prayers for the slain former premier during a rally in front of Gyeongbokgung Palace, a tourist attraction in Seoul, before marching several hundred meters through Gwanghwamun Plaza.

The Unification Church was founded in South Korea in 1954 by the late Sun Myung Moon.

A number of its followers have been convicted in Japan over “spiritual sales,” in which people are talked into buying jars and other items for exorbitant prices by use of threats, including the citing of “ancestral karma,” leading to some critics calling the group an antisocial cult.

The church has come under the renewed scrutiny in Japan since the assassination of Abe in early July, as the gunman has been quoted by investigators as saying his family was ruined after his mother made huge donations to the church and he believed the former prime minister was linked to the group.

Many Japanese women are said to have married into rural parts of South Korea after becoming followers of the group. There have been many cases of Japanese-South Korean marriages between second-generation followers in recent years.

According to the Unification Church, there are currently about 10,000 families with Japanese spouses living in South Korea.

Over 100 Japan lawmakers had links with Unification Church: survey